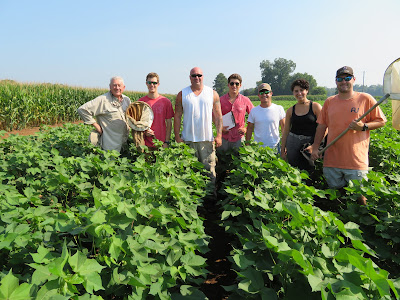 Cotton insect management is constantly evolving or changing. It may be in the area of: genetic trait or insecticide resistance; new economic insects such as the silverleaf whitefly or the brown marmorated stink bug; the introduction of new chemistry or new traits such as the lygus-thrips trait that will likely be available about 2021 or 2022.

Our current production system in Alabama is good at present as it relates to insects. This is evidenced by the good to great yields we have produced (when not impacted by tropical storms) in recent years. We do not need to make major changes in our production system based on 2018. Let's don't let one weather related disaster change the good job growers are currently doing. Maybe tweak a few points. One of those being a major focus on earliness. Earliness would be beneficial in a wet harvest season, help in reducing whitefly damage in southeast Alabama and minimize the new cottonleaf dwarf virus disease concentrated  in southwest Alabama.

In this article I want to point out where we are with the management and control of some of our major insect pests and highlight some things we need to be aware of in 2019 and the next few years.

Beginning with thrips, where do we stand? We have documented resistance to both seed treatments - thiamethoxam (Avicta) and imidacloprid (Aeris). Resistance to thiamethoxam is higher and more widespread throughout most of the cotton belt. Imidacloprid has proven more consistent in our Alabama research trials. However, the resistance level of either chemistry did not seem to increase in 2018. This may have been due to a light and late thrips year. The peak movement of thrips from wild hosts to cotton in 2018 did not occur until about mid-late May, when early planted cotton was beyond the 5th true leaf stage.

Planting date and weather are the two most important factors influencing cotton thrips injury levels. Rainfall influences when thrips move from wild hosts to our crops. The more abundant the spring rainfall, the later the movement of thrips. The warmer the nights, the faster the cotton will grow up. Cotton is only susceptible to thrips injury from the first true leaf to about the fifth true leaf. The faster cotton is growing, the shorter the thrips susceptible window is in days.

We can use planting date, rainfall and temperature to determine when we need to help our seed treatments with a supplemental foliar spray for thrips control. In fact, a model has been developed by entomology researchers at North Carolina State that will project the level of thrips pressure to expect, based on your planting date and weather records from your nearest weather station. This model was developed for the entire southeastern cotton growing area, by utilizing thrips data generated on University research stations from throughout the southeast. This model can be accessed and utilized by growers, consultants, and fieldmen by going to http://www.climate.ncsu.edu/CottonTIP.

The second insect I wish to discuss is aphids. I am including an aphid discussion for the 2019 season because of their potential relationship to the new virus disease known as the cotton leafroll dwarf virus (CLRDV). Our usual management advice for aphids is to just wait for the naturally occurring fungus to take out the population. In the past we have recommended to control aphids with a foliar insecticide only when cotton was under extreme drought distress. In recent years we have also added a second exception for controlling aphids. It is advisable to control aphids when they are heavy and a bollworm moth flight is expected on 2 gene cotton varieties. Aphids and their resulting honeydew make it impossible for scouts and fieldmen to detect bollworm eggs or small larvae among the aphids and honeydew. Foliar sprays to control aphids would need to be done in advance of the expected moth flight.

Aphids begin to appear in June. First on select plants, maybe less than 10%, in early square cotton. The population will usually peak and die off from the natural fungus disease about mid July. The slower the population takes to build up, the longer it usually takes to crash or die off. This natural fungus usually takes about 10-14 days later than desired. The moth flight of corn earworms/cotton bollworms coming from corn depends on the maturity of corn, but usually occurs in Alabama between about July 10 in south Alabama to August 1 in the northern counties.

Aphids are vectors for the CLRDV disease that was found in several Alabama counties in 2017 and 2018. However, experts tell us that the disease can be transmitted in as little as 40 seconds. Therefore, aphid control will not eliminate this disease. In other parts of the world where the disease occurs it has been controlled primarily by developing resistant germoplasm.

Aphids may rebound in cotton in late season. This late season population is not as prone to die off from the fungal disease. Foliar sprays may be warranted if lower bolls are opening and are susceptible to being covered by honeydew which allows sooty mold to develop on the open lint. The late season aphid population could be more closely involved with the disease transmission since the disease seems to be much worse on late planted cotton.

In a follow up blog, if time permits, we will discuss management ideas for plant bugs, escape bollworms on 2 gene cotton, and stink bugs, we will mention the silverleaf whitefly (SLWF) but hopefully we will not see the pressure from this pest in the southeastern counties as we did in 2017.
Posted by Ron H. Smith at 10:54 AM