Several reports have been received already about grasshoppers in moderate to high numbers in cotton fields that are in the process of being planted in central Alabama. The presence of grasshoppers is not surprising. But the fact that some fields have predominately adults is surprising. Normally the population is almost all immature at this time of the season. Adults usually occur in late May and June. The significance of the life stage is that adults are much more difficult to control. Acephate (Orthene or generics), chlorpyriphos (Lorsban or generics), Dimilin and others give good control of the immature stage. Much higher labeled rates are required to control adults.
Posted by Ron H. Smith at 8:52 AM

Some cotton has been planted in many areas of the state. However, weather extremes have interfered with planting in the past 10 days, too much rainfall in the northern areas and too little in the southern areas. No significant rain fronts have occurred in the Wiregrass (southeastern) area in almost a month.


Cotton planted on April 13 at Prattville, AL, is up to a nice healthy stand with most plants putting out the bud of the first true leaf on April 26.
Posted by Ron H. Smith at 8:51 AM

Three cotton scouting schools will be held in Alabama in early-mid June. They are as follows:

All sessions will begin at 8:30am and continue until noon. Recertification points will be awarded to those in attendance.
Posted by Ron H. Smith at 8:50 AM

Points for Discussion:
1. Low Input System - Conventional vs. Technology
2. Evolution of Bt Cotton - Various Genes Involved
How do they compare and what is in the future?
3. Phase Out of Temik
What will be the greatest impact?
4. Stink Bug Research Towards a More Rapid Survey Technique
Factors that influence external vs. internal stink bug boll damage. 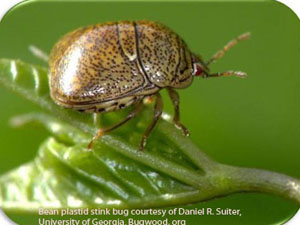 Native to Asia
First detected near Athens Georgia in the fall of 2009
Has since spread over much of Georgia, South Carolina and into a few counties in North Carolina and Alabama
Feeds primarily on legumes
Reduced soybean yields by about 20% in 2010 test fields in Georgia
Feeds on stems and leaves
Has high reproductive potential
Can be controlled with pyrethroids and other chemistry
Is a public nuisance problem in fall of the year as they enter homes and buildings to hibernate.

First discovered in Pennsylvania in late 1990s
Native of Asia
Big problem in specialty crops in mid-Atlantic states (grapes, apples)
Caused 60-90% loss in peaches and apples in 2010
Called Interstate Bug since it spreads by trucks and campers
Has wide host range - feeds on about everything
Have been found in three Alabama counties in late 2010
Has long proboscis so can go through the husk of corn

Native to South America (Brazil)
First found in Louisiana in 2000
Observed on soybeans in Baldwin County, Alabama in July 2010
Is sensitive to winter temperatures below 20 degrees F
Has high reproductive potential
Is primarily a legume feeder
Can cause heavy damage to soybeans
Feeds earlier and more aggressively than other stink bug species
More difficult to kill than Southern green stink bug
This concludes Week Five of Cotton Insect Management 2011. The slide show can also be viewed at http://www.aces.edu/anr/crops/documents/CottonInsectManagement2011RonSmith.pdf
Posted by Ron H. Smith at 1:22 PM