In most seasons, we would be entering the home stretch for cotton insect control by early August. While this may be true for fields planted on time in 2019, it is not the case for a lot of late planted, late emerging, late maturing fields this season. I hope we can narrow our focus to just a few species of insects for the remainder of this season. The primary group would be the bug complex (plant bugs and stink bugs) and escape bollworms on 2 gene cotton. However, there are several other insects that could arise if weather conditions or other circumstances permit. These are spider mites, late season aphids or even silverleaf whiteflies.

The insects of focus for the remainder of the 2019 season may not be as concerning as how long our management and control programs should extend into September and even October on our later maturing cotton. Let’s look at some general guidelines. If past seasons give us any trends, our escape bollworm issues should end by Labor Day. However, we should continue our monitoring as long as our late maturing fields have squares in the top of plants that would serve as a food source for a one-day old bollworm. Once all the squares are gone, escape bollworms will have a difficult time becoming established. The bug complex should eventually be dominated by stink bugs here in Alabama. This may consist of several species; the brown, southern green and the brown marmorated (BMSB), which can now be found in many cotton growing counties. How long should we continue stink bug controls on late maturing cotton? Our general rule with our traditional stink bug species is to continue controls until the top bolls we hope to harvest are about 25 days old. When the BMSB is in the mix, we may need to protect even longer since this species will attack bolls from thumb nail size, up until they begin cracking. With our late maturing fields this season, we will need stink bug controls through at least the month of October. An application for stink bugs usually gives us 10-14 days of boll protection. However, as some fields mature out, just like with corn, stink bugs will move to younger cotton, or swag areas of fields that are still producing bolls or to late maturing soybeans. In other words, as our crops mature in September and October we will get field to field and crop to crop movement of stink bugs. As far as insecticide choices—Bidrin, bifenthrin or any other pyrethroid at a mild to high labelled rate should give adequate control. The best way to scout for stink bugs will be to examine bolls for internal injury. Just observing or using a sweep net or drop cloth for stink bugs is not very effective and often leads to underestimating the number present. 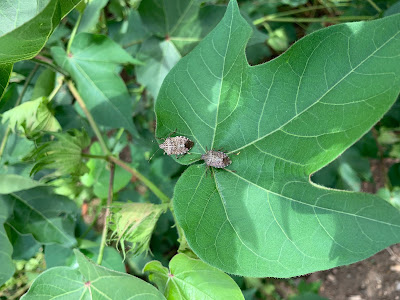 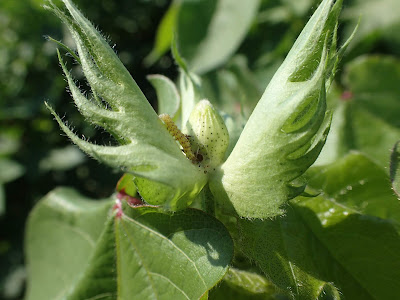 Following a mild winter, red-banded stink bugs (RBSB) are a soybean pest that we should always have on our mind. Last Tuesday, 7/16/19, we found treatment level of adult RBSB at the Prattville experiment station. We found these in relatively early planted soybeans at R4/R5, and although we don’t have very large plots, we were exceeding 5 RBSB on 10 sweeps. That works out to about 3 times threshold and is a cause for concern for soybean growers in Alabama. This is a pest that we haven’t dealt with as much as the mid-south growers in Arkansas, Louisiana, and Mississippi, but they’ve put out some excellent info for control tactics that we can draw from.

RBSB’s are a tropical insect and behave and look different in many ways to the native stink bug pests we often deal with in soybeans, and the control tactics differ as well. RBSB are harder to capture with sweep net samples and time of day can have a large impact on the number you catch in the same field. In our plots in Prattville we caught 3 times threshold on 7/16 and 7/22 on warm mornings when the dew was still wetting the plants, but caught 0 on 7/18 during a hot mid-day. These stink bugs will drop off the plant very quickly when disturbed, and it may be hard to sample them in the heat of the day when they can evade capture or even on very cool mornings when they may be seeking shelter from the cooler temperatures.

RBSB’s should be controlled when populations average 4 adults or nymphs per 25 sweeps through R6.5, 10 adults or nymphs from R6.5 to R7, and should only be controlled after R7 if weather conditions are unfavorable. Cool and wet conditions can make mature soybeans more susceptible to feeding from RBSB, but if conditions will be favorable, no control is necessary after R7. RBSB are harder to control than our normal soybean stink bug complex and generally require a tank-mix to get adequate control and residual to keep them knocked back. Bifenthrin at 5.8–6.4oz with a half-pound of acephate is one of the most reliable control options. Bifenthrin can also be tank-mixed with imidacloprid at 3oz or Belay at 4oz and provide reliable control. Endigo at 4–4.5oz is also a good control option, but may not be available for many producers.

If you have any questions or concerns, please contact Ron Smith at 334-332-9501 or Smithrh@auburn.edu.

Adults are identified by their cigar shape when compared to normal stink bugs, the red band behind their head, and the clear/white spine extended forward between the legs as picture on the left.