What are we currently finding in Alabama cotton fields? Plant bugs, both the tarnished and clouded species, have finally reached threshold or treatment levels in April planted fields that have not been sprayed. Some level of brown stink bugs can also be found in these same fields. A bug clean up spray would be advised for most cotton that is in the fourth or fifth week of bloom. Peak numbers of squares and bolls are currently at risk. Cotton planted after about May 10 missed most of the plant bugs this season. In central and south Alabama, there are very few plant bugs currently present in wild host or other crops. In other words, there are no more plant bugs in the landscape to migrate to cotton in 2017 in that region.

Between July 24 and 28, numerous field people from all areas of the state were contacted about escape bollworms on cotton with caterpillar technology. As of July 31, no none has reported any problems. We have conventional cotton on research stations in several areas of the state. Some level of bollworms and damage can be found on this cotton. The corn earworm flight from corn began about July 15 and has likely already peaked. Tobacco budworms will enter the mix during the month of August, but they will not be part of the "escape" situation in August. However, fieldmen should continue to monitor closely for escape bollworms. In Alabama, I would suggest we try the pyrethroid chemistry first if escapes are found.

Spider mites came into the picture about the third week of July in the Tenn. Valley area. Mites will likely show up in other fields statewide if we ever experience a 7-10 day period between rain events. Abamectin will provide the most economical control of mites. Whiteflies may occur in late season on our late maturing fields. If whiteflies are observed, I would recommend we use pyrethroid chemistry for stink bugs since Bidrin seems to aggravate the whitefly situation.

We will likely see stink bug numbers increase as we move into August and even September in our late maturing cotton. The southern green stink bug will make up a greater part of the population in coming weeks. This gives us the flexibility to choose either pyrethroid or phosphate chemistry. For weeks 3 through 6~7 of bloom, we recommend a 10% internal damage boll threshold for stink bugs.

Thus far in 2017, insects have not been a major limiting factor in Ala cotton production. Let's hope we can keep this trend going for several more weeks.
Posted by Ron H. Smith at 11:15 AM 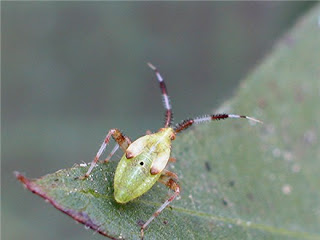