They always say, “there are no two growing seasons alike,” and 2021 was no exception. Spring rains across much of Alabama pushed back planting, causing a lot of “late” cotton. Several storms also moved through later in the year causing headaches across different regions of Alabama. Even with all the issues we have had, we still have good yield prospects this year. Hopefully we will have a cooperative finish to the harvest season and be able to get everything out in a timely and efficient manner.

Like last year, insects were not a major limiting factor. This is largely due to good scouting and timely insecticide applications when needed. Starting at burndown and going through to the end of bloom, several insects required monitoring and treatment. Walking back through the season, here is a look at what was observed and experienced.

Grasshoppers caused concern on a large percentage (≈60%) of acres statewide, primarily across central and south Alabama, and particularly on our sandier soils. Most of these fields were in reduced or no-till systems and required an insecticide at burndown or at-planting to mitigate risk of stand loss from this pest. In general, grasshoppers were managed effectively and little or no loss is expected from them. In a “normal” year, we would have expected thrips pressure to be relatively light due to the high percentage of cotton planted late. However, as experienced last year, late planted cotton experienced significant thrips pressure. The majority of the acres needed a foliar insecticide to supplement seed treatments, and most of those acres received one. The emerging mollusk pests (slugs and snails) also caused issues. Slugs are always a concern in cool, wet years and in high residue fields. Snails were a particular problem in several fields in Southeast Alabama. We currently have limited options for slugs and no options for snails (outside of tillage). These pests caused some replanting in spots this year. 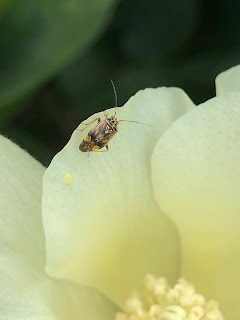 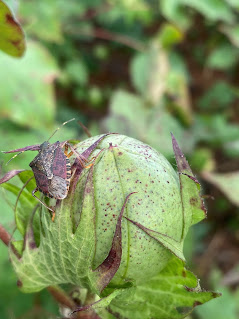 The tarnished plant bug was the pest that caused the most headaches for pest management decision makers in 2021. Within a 4-5 day stretch in mid-June, a major plant bug migration occurred statewide. This is was a rare event, as normally plant bugs move from spring hosts to cotton at different times in the north and south. This mass migration was further complicated by the overall lateness of the crop. Adult plant bugs primarily infested the earliest planted (most mature) fields that were just beginning to develop pinhead squares (a small proportion of the overall crop). Plant bugs began feeding on these pinhead squares and laying eggs that developed into an embedded population of immatures in July. With much higher than “normal” populations in fields statewide, the plant bug issues never played out as we are used to.

In addition to tarnished plant bugs, the clouded plant bug was also found in many fields across central and south Alabama. While not at treatable levels alone, this pest drove insecticide selection decisions in several fields. Many fields at peak bloom, requiring sprays for stink bugs, still required scouting and treatment for plant bugs. Overall, stink bugs were at high numbers statewide, including the Tennessee Valley, where stink bugs are historically considered a sporadic pest. Many fields across Alabama required 4 or more sprays for the bug complex this year. In many cases, proximity to corn appeared to play a key role in the overall pressure of the bug complex in cotton.

Other secondary pests, such as spider mites and aphids were in fields and required attention at times, but overall were light statewide this year. Similarly, Alabama cotton experienced a light bollworm year. Although some of our traps caught high numbers of moths at the peak flight, we did not receive reports or observe escaped bollworms or significant damage from worms. As has been observed for several years, the 2- and 3-gene Bt varieties provide very good control of bollworms in Alabama.

As we prepare to move into the 2022 planning season, it is important to think back through what happened in 2021 and try tweak our pest management plans to continue to effectively manage and keep losses to insect pests low. 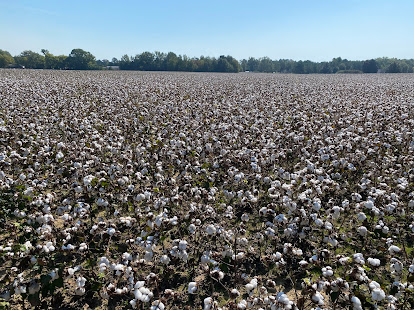